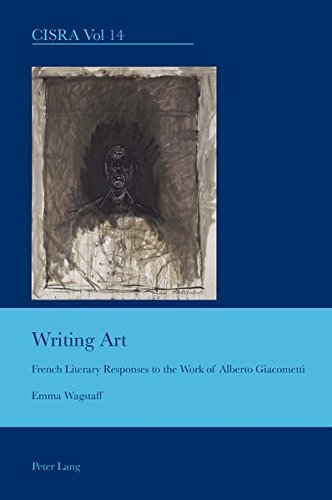 Writing Art: French Literary Responses to the Work of Alberto Giacometti (Cultural Interactions: Studies in the Relationship between the Arts) por Emma Wagstaff

Emma Wagstaff con Writing Art: French Literary Responses to the Work of Alberto Giacometti (Cultural Interactions: Studies in the Relationship between the Arts)

The Swiss artist Alberto Giacometti participated in Parisian literary and cultural circles from the early meetings of the Surrealists to existentialism and the diverse currents in art and poetry that followed. Numerous writers were inspired to respond to his sculpture, drawing, painting and publications during his lifetime and after his death in 1966. This book considers examples of 'poésie critique' devoted to Giacometti's work by major French poets and thinkers from André Breton to Yves Bonnefoy. Through close readings of key texts, it discusses the extent to which each writer has succeeded in overcoming the dichotomy between a text and its visual stimulus that so often leads to a hierarchical relationship. Many of these writers focus on the materiality of Giacometti's works of art and of the written word. Examination of their writings thus allows new understandings of 'poésie critique' and 'ekphrasis' to be developed.