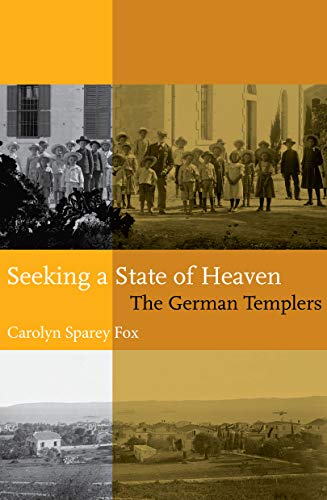 The German Templers – their beliefs, their mission and their links with the Bahá’ís in Haifa.

Who were the German Templers living in Haifa during the 19th century, and what inspired them to leave their German homeland to build a community in Palestine?

Who were the Bahá’ís living in Palestine during the 19th century, and why had they been banished to the prison city of Acca?

And what connection could there possibly be between two such diverse groups from such different cultures, one from the East and the other from the West?

In October 1868 two families arrived by steamer at the port of Haifa, in Palestine. They had abandoned all they had ever known in their German homeland in order to settle in the Holy Land, and as time went by they were joined by other families, establishing roots at the foot of Mount Carmel. Calling themselves the Temple Society, they had one aim - to gather the Children of God in Jerusalem in preparation for the Second Coming of Christ. Who were they, what did they believe, where did their beliefs come from, and what connection, if any, did they have with the group of Bahá’í prisoners who had arrived in Palestine just before them?

The German Templers emerged in Germany during the mid-19th century, their history a legacy of preceding centuries during which various Christian groups bravely undertook to establish the perfect Christian religion in preparation for Christ’s promised return. To find out what influenced and inspired them the reader is taken on a brief journey through the often extraordinary and colourful lives of some of the prominent figures who undoubtedly influenced Templer philosophy.

Two months before the Templers finally achieved their dream and landed in Haifa, a group of exiles had arrived at the prison city of Acca, just a few miles north across the bay. Prisoners of the Ottoman Empire, their arrival in Palestine marked their final destination following fifteen years of successive banishments from Persia. Their leader was Bahá’u’lláh, the founder of the Bahá’í Faith. The spiritual significance of the encounters between the Templers and the Bahá’ís becomes clear as the history in Seeking a State of Heaven unfolds.