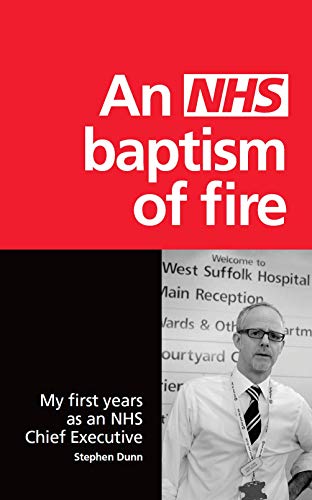 An NHS baptism of fire: My first years as an NHS Chief Executive por Stephen Dunn

Stephen Dunn con An NHS baptism of fire: My first years as an NHS Chief Executive

NHS Chief Executives have a shorter shelf life than most premiership football managers. So why would Steve Dunn, a former high flyer in the Department of Health and a key architect of major policies such as Foundation Trusts, the Hinchingbrooke franchise and the friends and family test into the NHS, take the job of Chief Executive at his local hospital? On the 3rd November 2014 Steve Dunn took up the reigns of West Suffolk Hospital as the trust headed for one it’s most challenging winter period’s ever and in the run up to a pivotal election in which the NHS would be centre stage. Here he sets out how he approached his first years as a Chief Executive. He talks about what he did, his experiences and his thoughts on whether small hospitals can have a bright future. He talks about the death of his father-in-law in his hospital just before he started. He talks about his daughter’s experience in paediatric intensive care and his son’s collapsed lungs and their life saving surgery. He tells through his blogs and Chief Executive reports the journey of how West Suffolk became officially one of the best hospitals in the NHS and one of the most digitally advanced hospitals in the NHS. He talks about his baptism of fire at the heart of the NHS battleground of the future. All royalties from the sale of this ebook are donated to the MyWiSH charity which supports West Suffolk Foundation Trust.